Metal sulfides, especially those in the nanoscale regime, are of intense interest in the geological, environmental, and material science sectors for a multitude of processes and applications, including the biogeochemical cycling of elements, environmental remediation, resource recovery, ecotoxicity evaluation, biomineralization, the origin and evolution of life, and the development of functional semiconductors. The popularity of research involving nano-sized metal sulfides partly originates from their widespread distribution in natural and anthropogenic systems. As is being recognized, nano-clusters, nano-crystals, and nano-aggregates of Fe-, Zn- and Cu-sulfides constitute a major fraction of the metal load in anoxic oceanic, sedimentary, freshwater, and deep-sea vent environments. Both biological and abiotic processes can lead to the formation of nano metal sulfides in the environment. Dissimilatory sulfate-reducing bacteria (dSRB), which utilize SO42− as a terminal electron acceptor and discharge reduced sulfur species to the environment, are perhaps the most important facilitators of metal sulfide precipitation in low-temperature geological settings. Abiotic processes such as hydrothermal venting and diffusion of sulfides (both biogenic and abiogenic) are also important mechanisms leading to the formation metal sulfide nanostructures.

It is exceptionally rare to find pure metal sulfides in nature. Most naturally occurring iron-, copper-, zinc-, and lead-sulfide have other metal elements incorporated in their crystal structures. How the co-existence of multiple metal elements may affect the structure and resultant stability/reactivity of metal sulfide phases, particularly those in the nanoscale regime, however, remains, for the most part, a mystery. In this project, we will investigate biogenic versus abiogenic mixed metal sulfide nanominerals, e.g., Fe-Zn, Fe-Cu, and Fe-Co sulfide systems. Our focus will still be these nanominerals' crystal structure, formation mechanisms, and reactivities. (Images below: self-assembly of biogenic ZnS nanocrystals; and transformation of biogenic Fe-sulfide from an amorphous structure to nanorods.) 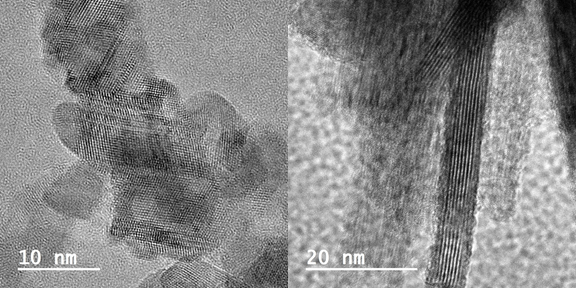 The NanoGeoBio Laboratory is also interested in identifying naturally occurring nanominerals as well as their associated geochemical environments and microbial communities. The current focus for this aspect of the work is the nanocrystals of elemental sulfur deposited in cave settings. Another example is naturally occurring sulfide nanominerals in shallow water bodies and contamination/remediation sites. For motivated graduate students who are interested in working in this area, please contact Jie directly. (The image below shows elemental sulfur deposits in Carlsbad Caverns National Park, New Mexico. Copyright: K. Sission, 1992.) 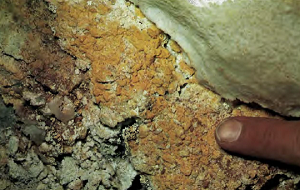 Nanomineral has the potential to greatly affect the behavior of associated microorganisms. For example, the former work of Jie revealed that the oxide nanominerals with similar sizes and shapes showed distinct effects on the survival rate of associated bacterial cells. This work also brought forward the idea of “mineral surface chemistry-directed increase of cell surface complexity” by discovering that more cytotoxic mineral surfaces stimulated the generation of greater amounts of EPS in the bacterial cells to enable community living in biofilms ( Xu et al., 2012 Astrobiology; Xu et al., 2013 EPSL). Illuminating the interactions between nanominerals and microbial cells remains a focus of our NanoGeoBio Laboratory.

The coupling of phototrophy with sulfide-oxidation and/or sulfate-reduction provides a plausible mechanism for microorganisms to tackle some of the restricting conditions in gypsum-dominated and sulfidic environments. The major motivation for this project is to illuminate the relationships between bacterial phototrophy, sulfide-oxidation (or sulfur-oxidation), and sulfate-reduction in water-restricted gypsum dunes, and in shallow sulfidic water bodies. We are combining analyses of field samples with lab simulation experiments for this work. 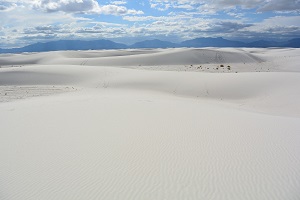 Oil contaminated mud flat sites along the Gulf of Mexico. (The copyright of the image belongs to S. Burgess.) 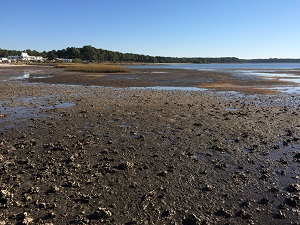 Significant abundances of phototrophic sulfur-cyclers have been previously identified in the Great Salt Lake, Utah. Their environmental roles and adaptation to the rapid changing climate remain to be scrutinized however. The lab is collaborating with Dr. Bonnie from the Great Salt Lake Institute, trying to illuminate the roles of phototrophic sulfur-oxidizers and their relationship with other communities in this hypersaline environment.

Detection and Characterization of Nanominerals in Complex Matrices

Intricately-structured nanoscale clusters, particles, crystals and aggregates (i.e., nanomaterials) are produced via natural processes in a wide range of geological settings, from groundwater, critical zones, volcanic ashes, glaciers, to lacustrine, riverine, estuarine, and marine sediments. Due to their extremely small sizes and high reactivities, these naturally occurring nanomaterials have the potential to greatly modify their relevant environments and processes. The nature and extent of the interactions of these indigenous nanomaterials with other biogeochemical components is literally terra incognita.  For example, metal-sulfide nanoparticles in mud flats may enhance the solar-energy conversion via forming synergies with photosynthetic bacteria, nanoparticles carried by glaciers could mediate the nutrient cycling and ecological balances in polar regions, or the inhalation of nanoparticles through exposure to fly ashes may affect the way human brains work.

A primary reason for this lack of understanding of the roles of naturally occurring nanomaterials is because scientists haven’t established an efficient way to separate them from their heterogeneous and complex natural matrices, thereby leaving us with no quantitative information and little qualitative description for their presence. In this project, Jie along with peer researchers at UTEP intend to develop a high-throughput facility that is specifically designed to isolate and sequentially characterize, both quantitatively and qualitatively, naturally occurring nanomaterials in various geological and environmental samples. This nano-facility will be essential for understanding the types and quantities of nanomaterials occurring in nature, necessary information for deciphering their biogeochemical roles in relevant environments.